A Tip for a Happier Relationship – Turn Toward 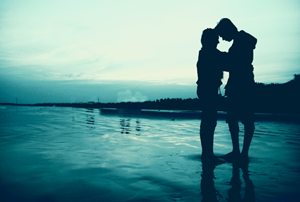 Do You Turn Toward, Turn Away Or Turn Against?

Each day, our partners make many attempts to connect with us, both verbal and nonverbal. World renowned couples research, Dr. John Gottman calls these attempts “bids” for emotional connection. A bid can be a question, a look, an affectionate touch or anything else that opens the door to connection. In his research, Gottman reports that a happy couple can make as many as 100 bids over the course of a meal! How we respond to our partner’s bids is a huge key to a successful relationship. Gottman’s research indicates that husbands who eventually were divorced, ignored the bids from their wives 82 percent of the time compared to 19 percent for men in stable marriages. Women who later divorced ignored their husband’s bids 50 percent of the time while those who remained married only disregarded 14 percent of their husband’s bids. There are three responses to a bid for connection: turning toward, turning away and turning against.

1. Turning toward. This means to react in a positive way to your partner’s bid for emotional connection. Research indicates that over time, these couples develop stable, long-lasting relationships. They also can access humor, affection and interest in each other during conflict. They can stay connected and not let temporary negative feelings destroy the relationship.

2. Turning away. This response is essentially ignoring or avoiding the bid or acting preoccupied. A consistent turning away response leads to defensiveness and seems to result in early divorce in married couples.

3. Turning against. Couples who turn against each other’s bids for connection appear more argumentative, critical and sarcastic. According to Gottman’s research, this style leads to divorce in a majority of cases, but not as quickly as couples who more habitually turn away from bids. Once a couple gets into the habit of rejecting each other’s bids for connection, they tend to give up on rebidding or resuming efforts to connect. In stable marriages, spouses rebid about 10 percent of the time and in couples heading towards divorce, there is rarely ANY rebidding. Gottman believes that a couple that practices “turning toward” behavior metaphorically “deposits” good will into the emotional (love) “bank” of the relationship. These “credits” accumulate and allow the partners to more readily connect when times become more challenging in the relationship. The bottom line is that “turning toward” your partner is a strong basis for emotional connection, as well as a powerful tool to sustain passion, romance and a healthy sex life.